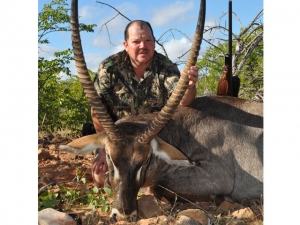 While on a hunting trip in the Limpopo valley we spotted a huge Waterbuck one day and two days later we were fortunate enough to get a second chance. There were a few Waterbuck cows next to a filled water pan and I suspected that a bull would be with the herd. Unfortunately the herd smelled us and ran off about 1 kilometre past a mountain ridge. As they passed the neck of the kopje (hill) we saw that there was a bull with the herd, trailing behind. We were in hot pursuit and I had the feeling that this was the bull we were looking for.

We went around the second kopje and saw the cows against the ridge trying to cross yet again. Some of the seven cows had already spotted us from above making it impossible to stalk. I took my time and envisaged where the unknown bull would follow the herd as by this time some of the cows were already on top of the ridge. Sure enough, after what felt like a very long time the big bull emerged from the thicket from the foot of the mountain onto an elevated clearing, but it was walking directly in the opposite direction. As the bull was about to disappear in the bush covered mountain at any moment the window of opportunity was very small. I sat down on my backside and supported my custom 30-06 on my knees, estimating that the position of the walking bull in the early morning sun through the Nightforce telescope. It was an unforgettable sight and I decided that the bull was well worth the taking.

The bull did not have any plans to stop and was still walking, quartering far away and upward, but I knew from the exceptional results of our Peregrine Bullets that it had the penetration capability. I squeezed the trigger aiming just ahead of the rear rump. The bull curved its back and stumbled down the mountain ridge, out of sight. We could hear it rolling further down. I knew right away that the Peregrine VRG-3 Bushmaster 180gr, at about 135 yards, did the job. As we came closer the size of the bull became evident. I knew that this was a lifetime trophy because of the huge body, horns and thick bases. The horns re-curved backward and then forward again. The horns measured 35 ½” and 36 ¼” respectively at the time.

After we inspected the slaughtered carcass it was evident that the bullet entered before the right rear rump, went through the stomach cavity and the centre of the heart. We found the bullet between the left front leg and brisket with 100% weight retention of the bullet body, the plunger being somewhere in the stomach. The bullet did what was expected of it and my hunting trip was made… 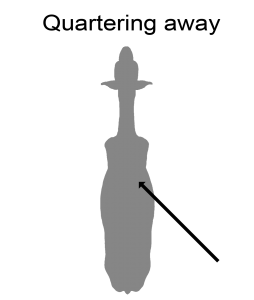