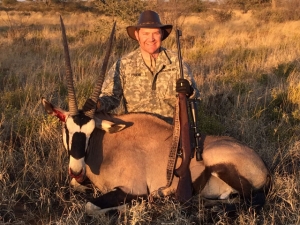 This second hunt was our regular Kalahari hunt for oryx on the farm Elgin in the Postmasburg district. The farm is approximately 25 miles from Deben and we were there from 10 to 14 August.

A few weeks prior there had been helicopter activity in the area causing the animals to be quite wild. On the day of the hunt only two animals were downed after almost five hours of running around in the Kalahari tussocks. After a long struggle we finally managed to isolate a small group of bulls from the rest of the group and were able to down two within an hour.

My bull was also a first – a head shot straight from the front, with the entire body in one line behind the head. Although it was quite close (66 yards) it was a very hurried shot, because the target was very shy and would have broken away from the group at the characteristic Oryx gallop. My shot went straight under the right eye and we were able to recover the bullet from where it had lodged behind the right flank. After cleaning the bullet we weighed it and it weighed in at 242.7 grains. According to my tables, the bullet weighed 250.0 grains on my reloading press, thus 97.8 % weight retention. Excellent performance! Lessons learnt: get a clear sight of your target before you aim – you might not have the luxury of time so practice shooting hurriedly and at a moment’s notice.

I have already acquired my Peregrine Match VRG5 bullets in time for next year, this time in two weights: 230 grains and 250 grains. I am going to test the 230 grains with S355 loads of 72.0 grains and 74.0 grains for a flatter trajectory at 220 yards. I personally believe that the “green” aspect of Peregrine Bullets’ is enough reason to use mono metal, but their performance is also excellent. Even the blue wildebeest, shot with a heavy caliber through both flanks caused relatively little meat damage.  I would truly recommend Peregrine Bullets to any hunter! 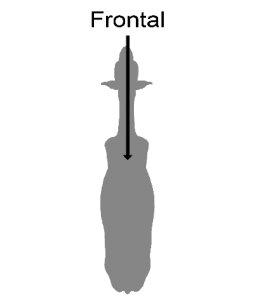 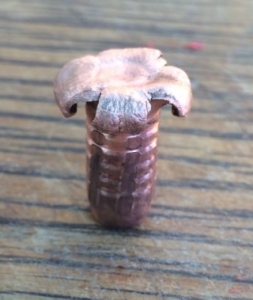